The best thing about Argentina is playing for a team 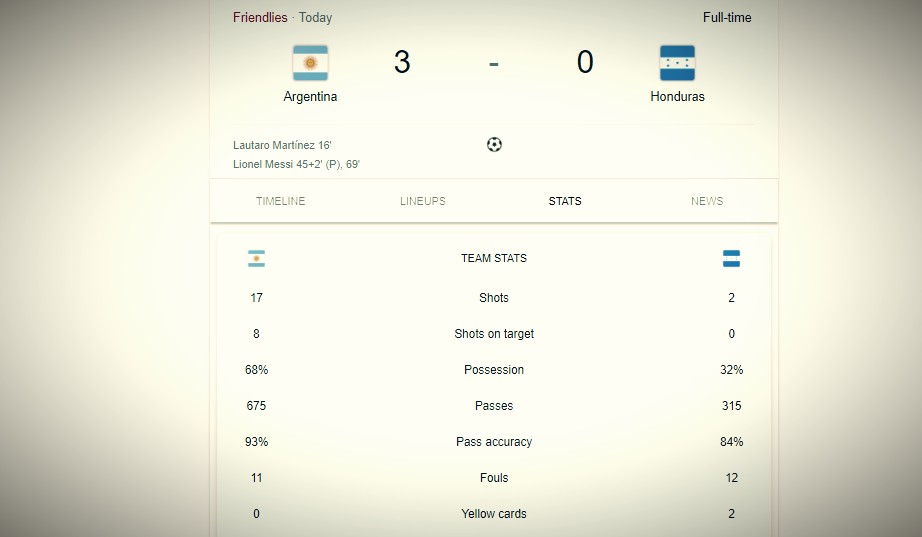 The best thing about Argentina is that they play as a team, nobody seems to be playing for themselves. Messi is playing in over today, I don’t understand why he is playing in this position. Scaloni chose this strategy to keep maybe 2/3 players busy, and I’d say it’s successful. All the time the 2 are running around Messi, giving others chances.

We were supposed to win with Honduras, it was normal to have a 4/5 goal difference. But the focus was on Team Argentina. I wanted to see if the bonding of this team is like Copa/Finalizima or not. At the end of the match, it seemed that there was a stronger bond between them. No pride, no stardom.

The decision that Scaloni likes best is to give Alvarez and Almada a chance, while Cadet prepares for the World Cup.

Both Almada and Alvarez are our future, both will be beasts along with Messi, Dybala, Lautaro, and Papu are awesome!

Especially today Lautaro had a bit of a flop but Papu played great. The Honduras keeper made a lot of saves, we also missed a few. Otherwise, it would be 6/7! Lisandro Martínez was outstanding on the ball, the rest also performed well.

Needless to say, the epic moment of the match was Messi’s foul. Brother, the way everyone was upset, it seemed that the Honduran player was really scared, I thought it would happen! As if going to war Argentina XI! Iconic moment
That’s why I said none of these Argentines play for themselves, play for the team, play for Messi. Messi is the undeclared mafia of the football world