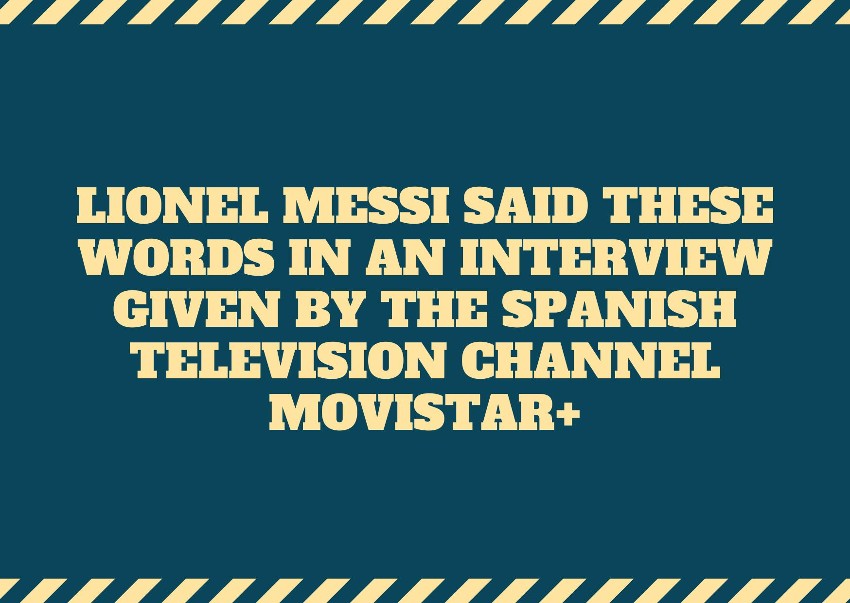 There was never any discussion, I wanted to play for Argentina, not Spain. I will still be involved with football after I retire from the game but I don’t know yet. I don’t see myself as a coach at the moment. There’s a downside to being Messi, sometimes I think I wish I wasn’t famous. I don’t like being the center of attention or people looking at me. But now I’m used to it.

I didn’t realize that I was special from a young age. I was just playing and these words would come from everywhere, people would come to watch me play. I didn’t think about it, I just wanted to win, score goals, and have a good time. I grew up with football from a young age as long I can remember, I always played with my brothers, cousins, ​​and older people in the neighborhood. I loved to play.

I have tried to improve myself day by day but what I have got is no doubt what God has given me. Coming to Barcelona was a great change, personally and in football. When I was in Argentina I only ran but played a little less with the ball. Then I moved to Barcelona and all the training here was with the ball.

In 2006 they started criticizing me for not tying my shoes in the games. A part of the Argentines always questioned me. When I was 7 or 8 I enjoyed playing at Newell’s Old Boys until I was 12. My hormone therapy was very expensive. I was in Barcelona for 15 days for testing, and being in Barcelona was very good for me. They gave me clothes and shoes and I started training and they gave me balls to warm up. I’ve never seen anything like that, Impress.

Football has changed a lot & become more tactical. When I was younger I was forced to play alone and now you don’t see football playing on the streets. I’ve always regretted that I didn’t enjoy life more with Guardiola. The Guardiola era was amazing, everything happened. Guardiola taught us what he learned and made us grow as a team. He was amazing. Guardiola is the best coach, I have no doubt. He is very special.

Luis Enrique was an important part of my career. I’m very happy for him. Ronaldinho, Deco, Matta, Silbinho, Xavi, and Puel made me feel like one of them from the start. The way they treated me was great. It’s not easy to enter the dressing room like that. After a long time, a touching moment with the national team was after winning Copa America. After many years and many disappointments, I cried at the last Copa America. If we hadn’t beaten Brazil in the final, the negative momentum would have continued. You’re second in Argentina, you’re undefeated.

“Scaloni is always a special personality. He is very good at match preparation, and good at communicating with everyone. He is natural, simple, and realistic.”

“Brazil and France have great and skilled players but we are in a good moment. With Lo Celso’s injury, we are a bit behind, we have to focus on the first match of the World Cup.”