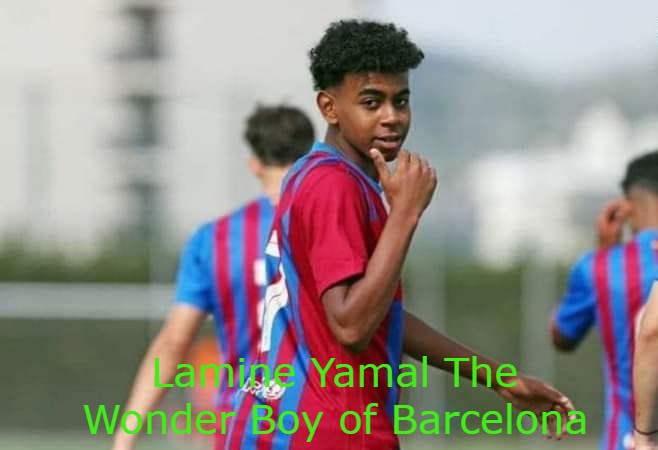 Lamine Yamal was born in 2007 in Mataro, Spain. At just 5 years old, Pre Benjamin joined the La Masia team. Since then he has been learning the Barca method while honing his techniques to face any rival or player of any age. Since then, in whichever tournament he plays, his name will be among the top scorers.

Now if we talk about Lamin then we will say that he is La Masia’s promising player and one of the complete young players.

Today we will know about his profile, characteristics, and last season.

Left-footed right winger Lamin can be called a goal machine in one word. He scored 138 goals in just 58 matches for Alevin A and Alevin C teams. Scored a total of 28 goals for Infantil A and Infantil B. And in the last season, he has 28 goals as well as 16 assists for Cadet A.

He is a player who can finish from anywhere on the pitch, and he does it with such ease. His finishing technique is impressive.

Like Ansu in La Masia, Lamin has established himself as an expert in his intelligence, off-the-ball movement, reading the game or what position he should take in the game. He can play in many different roles and he gives his best in all positions.

If we talk about his progress then it will come first –

Has made a lot of improvement in his physical condition.

He has adapted himself from a center forward to a versatile position. He is a great dribbler, he is a player who can also play as an offensive midfielder and creates scoring opportunities with ease.

Lamin is one of those players who impact the game in many ways. If the team needs goals, he will help. And if it seems like dropping him on the pitch, someone is needed to create scoring opportunities? No problem, he changed positions many times during the match and dropped down to help the team.

If we have to talk about Lamin’s scoring chances, then we have to say that his vision is excellent, his spoon pass (Loudrop style), through the pass, long pass, and overpass is all in him. He can pass perfectly and accurately.
Lamine is able to influence his team and teammates when he is on the field. He makes everyone on the field better. Every touch of the ball is wonderful.
He can play left winger, right winger, and center forward, he was excellent as a false nine. His quality and patience as an offensive midfielder impressed everyone.

As I mentioned earlier, Lamin is a fantastic dribbler and always creates danger for the opposing team’s players in front of the penalty area. His first touch is excellent and unpredictable.

Lamin makes everything very easy. He doesn’t care if he has 2 or 3 defenders on the field. He plays well in tight spaces, sometimes he has no choice but to call a foul to stop him. Dribbling as well as decision-making is also great.

He also has the “pausa” element in him, knowing when to slow the game down and when to speed it up. He has the ability to combine with his teammates to change the pace of the game. He is a very creative offensive all-rounder. Also a playmaker.

Lamin is an exceptionally complete player, but he also has some flaws. Like young players, he lacks a bit of concentration. In some matches, he doesn’t reach his full potential and in some matches, he loses focus in passing, but not in all matches. Ariel Duel also has problems but she is tall enough. Let’s see if he can improve himself by working on these this season.

After all, if he stays professional and injury-free like this, he could become the youngest debutant and goal scorer in the first team in the future. His playing style is similar to Rivaldo Neymar and Riyad Mahrez.

Looking forward to seeing him at Youth UCL this season. Special Talent of La Massiere.