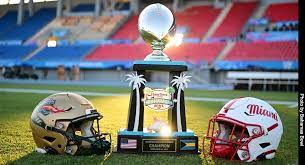 The 2022 college football bowl season kicks off with the fan favorite Hometown Lenders Bahamas Bowl Friday morning, featuring a matchup between the Miami Ohio Redhawks and the UAB Blazers.

In the very first meeting between the two schools, all eyes will be on UAB quarterback DeWayne McBride as he anchors the offense as well as the run game – McBride is the nation’s leading rusher with 1,713 yards on the year. In just 11 games, McBride set school records for rushing yards (1,713), rushing yards per game (155.7), rushing touchdowns (19), yards per carry (7.35), 100-yard games (10), 200-yard games (3) and total points (114). He also set the single game school rushing record with 272 yards on just 16 carries against Louisiana Tech. UAB is sixth in the nation, averaging 243.8 rushing yards per contest and 17th with 30 rushing touchdowns in 2022.

So fans of running the damn ball will be thrilled with this matchup.

It won’t be all palm trees and balm breezes for the Blazers though – Miami is 41st against the run, allowing a MAC low of 135.8 rushing yards per contest. The RedHawks have allowed under 100 yards rushing four different times and have given up just 15 rushing touchdowns all season long.

Offensively, the Redhawks have a dual-threat signal caller of their own in redshirt freshman quarterback Aveon Smith, who took over for starting quarterback Brett Gabbert who only played in four games after sustaining an injury in Week 1. Smith is the first Miami quarterback in program history to lead the RedHawks in rushing (503 yards) and passing (1,137 yards) yards in a season.